You are here: Home / Introductory / What are Social Robots & How Do They Help the Elderly Age in Place Better & Longer?

What is a Social Robot?

“For me, a social robot is first and foremost a companion. Yes, it’s smart, learns, has the ability to understand us and talk. It can perform all sorts of tasks on our behalf. But we have to be able to relate to it and feel like it can relate to us too.” wrote Amy Stapleton and I generally agree with her description. TechForAging’s focus is on products for home usage.

I discovered Social Robots in April 2016, and that led to the creation of TechForAging.  I selected a Computer History Museum* “Revolutionaries” (a PBS series) episode on artificial intelligence for a monthly discussion group I led in my community.

In the video, MIT’s Cynthia Breazeal speaks about Jibo, a social robot that was being created as a companion for young children and for the elderly. When researching social robots in preparation for the discussion group, I was surprised to find many others being developed, including projects of major companies.

Many people working in the eldercare space have a story about being motivated by experience with a loved one. For me, it was seeking a better solution for supporting my mother-in-law (she passed away Feb. 2018 at almost 102).

She lived over two hours away and loved her computer. So, for me, social robots were the better solution I had been seeking for about five years, and I decided that I needed to get involved somehow.

Back to “What is a Social Robot”. Wikipedia offers a complex, academic, definition of a Social Robot. In addition to the definition above about companionship, and particularly for those in the early and late stages of life, there is a caring aspect. This means it assists humans that are responsible for providing care.

Additionally, and for those at other stages of life, the social robot must provide useful functionality. Lots of people have been working in this area for many years.

Several underlying technologies have advanced to the point where I believe Social Robots may soon become available to help us age in place better and longer. Read what Astro Teller says about “soon” in a quote in this article.

Another term for social robots, from the International Federation of Robotics, is Personal Service Robot – a more rigorous way of looking at this topic. The table below is from a 2016 report by this organization. 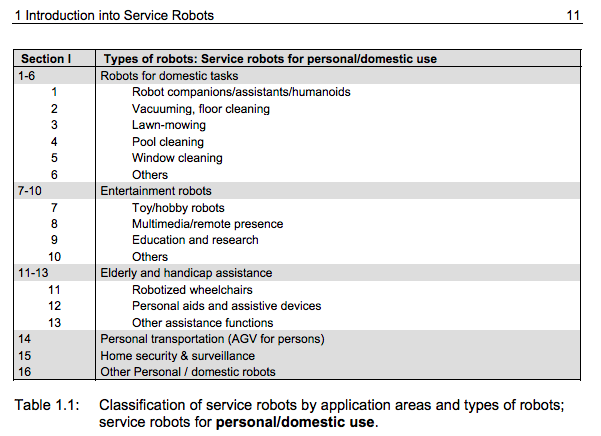 This is why I believe Social Robots will be important for Aging in Place. Many products provide benefits for a specific problem area such as aspects of taking medication (reminding/dispensing/monitoring).

Like smartphones, social robots will offer a variety of functions. The ones covered by TechForAging offer (some, not all, of these) benefits I view as important for elders Aging in Place:

The conversational interface was the first thing that struck me. Back then, in April 2016, Alexa was not yet a household name and its competitors did not yet exist.

To me, a successful social robot, where we relate to it and feel that it relates to us (as noted in the definition in the first paragraph), excels at the first two bullets points above.

What Types of Social Robots Are There?

Here are some categories, so far:

The reason there are humanoid and non-humanoid approaches has to do with a theory called the “Uncanny Valley”, defined by a Japanese researcher in 1970.

His theory is that humans basically prefer the humanoid unless there are perceived imperfections making them uncomfortably creepy. Some use a humanoid form but are obviously a robot, while some are attempting to develop robots that look just like people.

The short, and funny, video below (will open in a UK Mirror window/tab) features one of the advanced, and popular, humanoid robots.

Do you find her creepy? Will we ever get to what is depicted in HBO’s WestWorld? Perhaps the question is, when will we?

The 25-minute video below, from the Al Jazeera series TechKnow, goes deeper into the Uncanny Valley and discusses other topics included in this article.

Stationary robots do not include the components, and complex logic, required to provide mobility. Therefore they should be less expensive and quicker to market.

Conceivably the Roomba, from one of, if not the, most successful robots companies  (iRobot, its maker, claims to have sold over 20 million robots), without the vacuum components, could provide mobility for a social robot. There are several of the short mobile variety primarily designed for young children.

A significant advantage of mobility is the ability to go into other areas of the residence, to follow the elder, to perform security patrols at night, to greet and escort guests into the residence, etc.

Telepresence robots are mostly designed for business purposes, but some are intended to combat loneliness and as aids for people with a serious mobility problem.

In general, telepresence robots do not provide additional functions, and some appear to be a Roomba-like base with an iPad/tablet type display connected via a tall stick.

The XPRIZE Foundation’s latest Challenge (2-minute video below) is for a telepresence robot on steroids. However, this scholarly article thinks it does not go far enough.

Companion pet robots don’t fully fit our definition as social robots but are intended for companionship, especially for those suffering from dementia, and related afflictions.

What do Social Robots Cost?

So far, the stationary type tends to be priced comparable to high-end smartphones – in the range of $600 – $900.

Someday, as with some other products, Medicare, or other insurance might cover the purchase. Today some insurance cost savings are available with the application of technology products because of a reduced risk of loss. As noted above, there are also potential cost savings for caregiver services.

Alternative strategies might become available. Look how many people are now getting a new smartphone every year, or two, via a subscription model. This makes sense given the rapid introduction of new capabilities and would make sense for social robots too.

One manufacturer does offer some of its products via “Robots as a Service”. However, it does not currently offer that for its consumer-oriented model.

When Will Social Robots be Available?

Jibo, which was marketed as “the first social robot for the home”, became available for sale at the end of 2017. When this article was first written it appeared to be in financial difficulties.

Unfortunately Jibo ceased operations in November 2018. The first iPhone came out in 2007. The social robot market is in its infancy.

As with the promise of driverless vehicles, there are both optimistic and pessimistic opinions to be found regarding when (if ever) they will succeed.

Note that the first Amazon Echo (Alexa) was released November 6, 2014. It was the hit of the very important CES (formerly Consumer Electronics Show) of January 2017. A September 2018 research report by Adobe projects that “After the upcoming holidays, nearly 50% of consumers will own a smart speaker”.

I am very optimistic about social robots.

Some social robots are available internationally, particularly in Asia. TechForAging focuses on ones available in the U.S. Many will have been developed elsewhere but will have a U.S. presence, with support, or a credible U.S. agent or distribution partner.

Japan initially, but now China and Korea as well, began working (long ago) on social robots mainly due to the higher proportion of the population being elderly. They, along with quite a few other nations, also significantly invest in this area with government funding as those governments are responsible for healthcare.

The cartoon below (as an “old timer”, I don’t find it funny), and the Forbes article offers a common view of what is happening internationally, versus in the U.S.

Because portions of the U.S. healthcare industry has a vested interest, I believe U.S. development is accelerating. The Obama administration had initiatives related to technology for “aging gracefully”, and robotics was one of the technologies being considered.

* I am a Computer History Museum member and volunteer. I think its website is great and it includes an online tour of the main exhibits.

Barry Sardis is the founder and chief editor of TechForAging. He started his journey in the tech world over 50 years ago as a self-taught programmer. Having an immense passion for technology, he finds joy in two things: learning stuff and helping others with what he has learned.

A Senior’s Smart Home Stories #8 – Smart Zigbee Outlet
Next Post: What is a Smart Home & How it Helps the Elderly to Live Longer & Better?